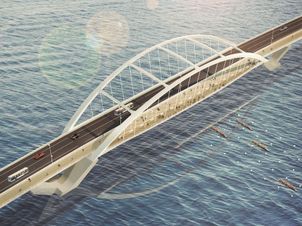 The Detailed Impact Assessment (DIA) has been approved for the City of Kingston’s Third Crossing project, opening the door for in-water work to begin on the bridge within the next few days.

The early December announcement was “a major milestone for our community and puts us one step closer to a better-connected Kingston,” Mayor Bryan Paterson said in a news release.

“With investment secured from all levels of government, the provincial Environmental Assessment completed, and now the federal DIA in place, the significant preparation pieces are done. We’re now ready to move forward with construction, full steam ahead. I couldn’t be happier with this news and the start of in-water work.”

A DIA is the most intensive form of environmental review conducted through Parks Canada’s regulatory process and was the method selected to analyze the environmental considerations, impacts and mitigation strategies for the project.

The final approved DIA has been posted on the city’s engagement platform, GetInvolved.cityofkingston.ca. A public engagement summary will also be posted, including comments submitted through emails, comment cards, and in-person at the two public open houses.

“We are on our way to building the Third Crossing,” said Jim Keech, president and CEO of Utilities Kingston. “This project has been many years in the making and today we are excited to be announcing federal DIA approval for this big investment in connecting our city and improving and expanding on transit and active transportation in Kingston.”

As the team begins in-water construction, public and stakeholder outreach will continue.

According to a notice on the city’s website, “with the in-water permit, residents and near neighbours can expect an increase in construction activities in the next few weeks. More information on this work will be available in the coming weeks.”

Kiewit, a North American construction company based out of Nebraska with offices in the US, Canada and Mexico, is in charge of the project and has partnered with Hatch, a Canadian engineering company, to complete the design.

The bridge is the first in Canada to use an integrated project delivery (IPD) model and the city says that IPD has many benefits, such as full collaboration on design and construction.

Design changes were made in January 2019 to keep the project on its $180 million budget with completion expected by the end of 2022.

The new design has arches below the deck instead of above.

Details of how the bridge will be built are included on the city’s website. The preferred construction method is the Causeway-Trestle Solution (CTS), a hybrid construction approach that involves a combination of temporary causeways and a temporary work bridge (trestle) to access the piers and superstructure.

A ferry barge or lifting span bridge will be used to transport equipment and material over the navigable channel.

Based on the peat layer thickness of the riverbed, the causeway area has been classed into three zones where three designs are proposed to be utilized. The causeways will to be progressively placed until the end of 2019 and would be progressively removed between 2020 to 2021.

The Third Crossing involves construction of a new, two-lane bridge spanning 1.2 km over the Cataraqui River and extending approximately 750 metres on land to the east and west.      The bridge includes shared and active transportation links such as: