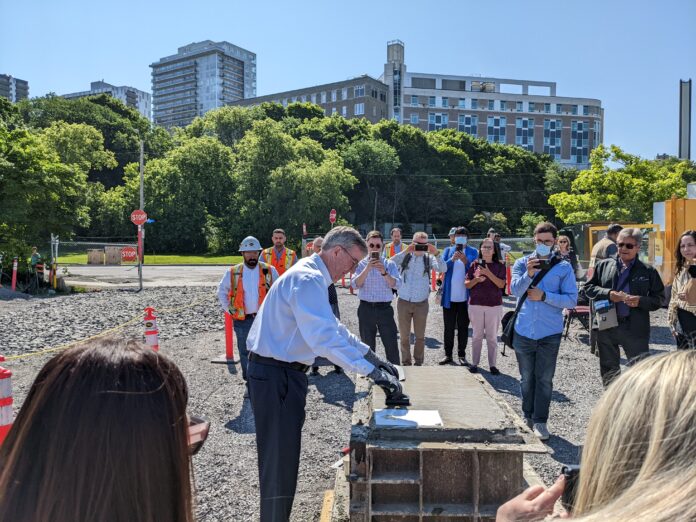 They said the project is on budget and schedule, despite lingering effects of the COVID-19 pandemic, labour disruptions and construction cost inflation.

“It’s a fixed cost (project),” said Matthew Luloff, chair of the Ottawa Public Library board.  “We’re not anticipating any change orders at this time. We spent quite a bit of time preplanning and preparing and we got the amount back from the winning bidder.

“So should there be any issues like inflation or whatnot, the cost will be borne by (general contractor) PCL and by the partners that are building it. And, if it comes in under budget, that’s a profit to the company that’s making everything.”

PCL general superintendent Tracy Condi said, despite labour disruptions earlier in the spring, “we are actually a little bit ahead of schedule when it comes to concrete work.”

Site superintendent Frank Santostefano said workers are completing the project’s deep foundations with large caisson drilling rigs.  On the site’s far eastern side, foundation work has started with pile caps and grade beams, as well as foundation walls. The first of two tower cranes is in place – the second will rise in about a month. “We’ve started our our underground mechanical wand electrical work as well – and we’re starting to see floors come up here in the next few months.”

Work on the sub-foundation needed to be co-ordinated with the Ottawa’s massive Combined Sewage Storage Tunnel (CSST) which runs directly beneath the structure.

When the building is completed in 2026, the structure will combine a Net-Zero Carbon standard and LEED Gold designation.

The ceremony included Algonquin first nation representatives, based on what a city news release described as a “meaningful and respectful partnership with the Anishabe Algonquin Nation.  The project partners placed tokens of significance into a concrete slab that will become part of the structure’s foundation.

“This is a historic and important ceremony that builds on the spirit of relationship building, active listening and reconciliation,” the statement said.

“Ādisōke will be an important hub in our city and a cornerstone of our community,” Ottawa Mayor Jim Watson said. “It will be a welcoming, inspiring and inclusive space that will be enjoyed by Ottawa residents, Canadians, Indigenous peoples and visitors from around the world for generations to come.”