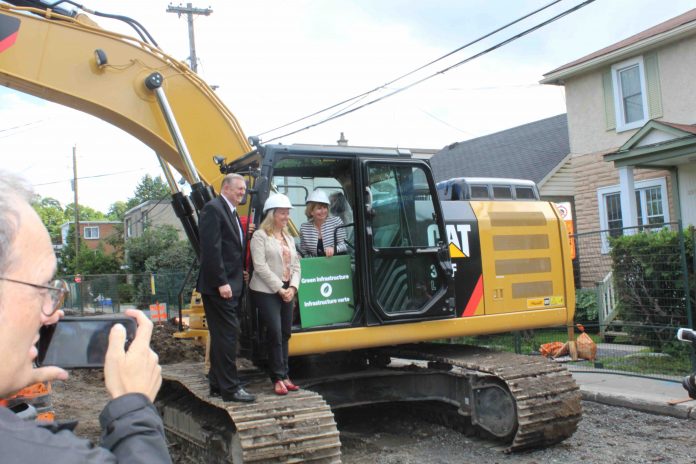 The three levels of government set up a media event in front of an under-construction $9.45 million road/water/sewer renewal project in Vanier in late July to announce municipal infrastructure funding initiatives and brag about their co-operation in maintaining and upgrading otherwise invisible services.

The federal government has agreed to pay half the cost of the projects – in this case, $4.725 million for the Lavergne-Joliet-Ste. Cecile Integrated Road-Water-Sewer Renewal Project. Meanwhile, the provincial government as contributed $2,362,500 and the City of Ottawa is paying the balance, about 25 per cent of the cost.

Overall, the politicians announce that 21 new projects in Ottawa have been approved under the Government of Canada’s Clean Water and Wastewater Fund. The feds say they are providing overall $15.8 million, while the provincial government is paying $7.9 million.

The funding announced in July is in addition to projects announced earlier in May, when the city received more than $45 million in joint federal-provincial funding through the Clean Water and Wastewater Fund. Overall, the city is receiving more than $69 million for 39 projects.

The money solves a funding shortfall issue for 22 Ottawa projects originally improved in 2j016, but not covered by an earlier $45 million commitment of federal and provincial government, which funded 18 Ottawa projects.

City infrastructure manager Alain Gonthier had said earlier that the city might need to have to go back to the drawing board to solve how to pay for the projects. The July announcement solves the problem, providing the roughly 75 per cent of the funding missing from 21 projects.

Much of the work is in Vanier, where the original infrastructure is upwards of 100 years old.

Projects listed in the government’s announcement have already started construction.

You can view a complete list of the projects for which funding was announced on July 25 here.