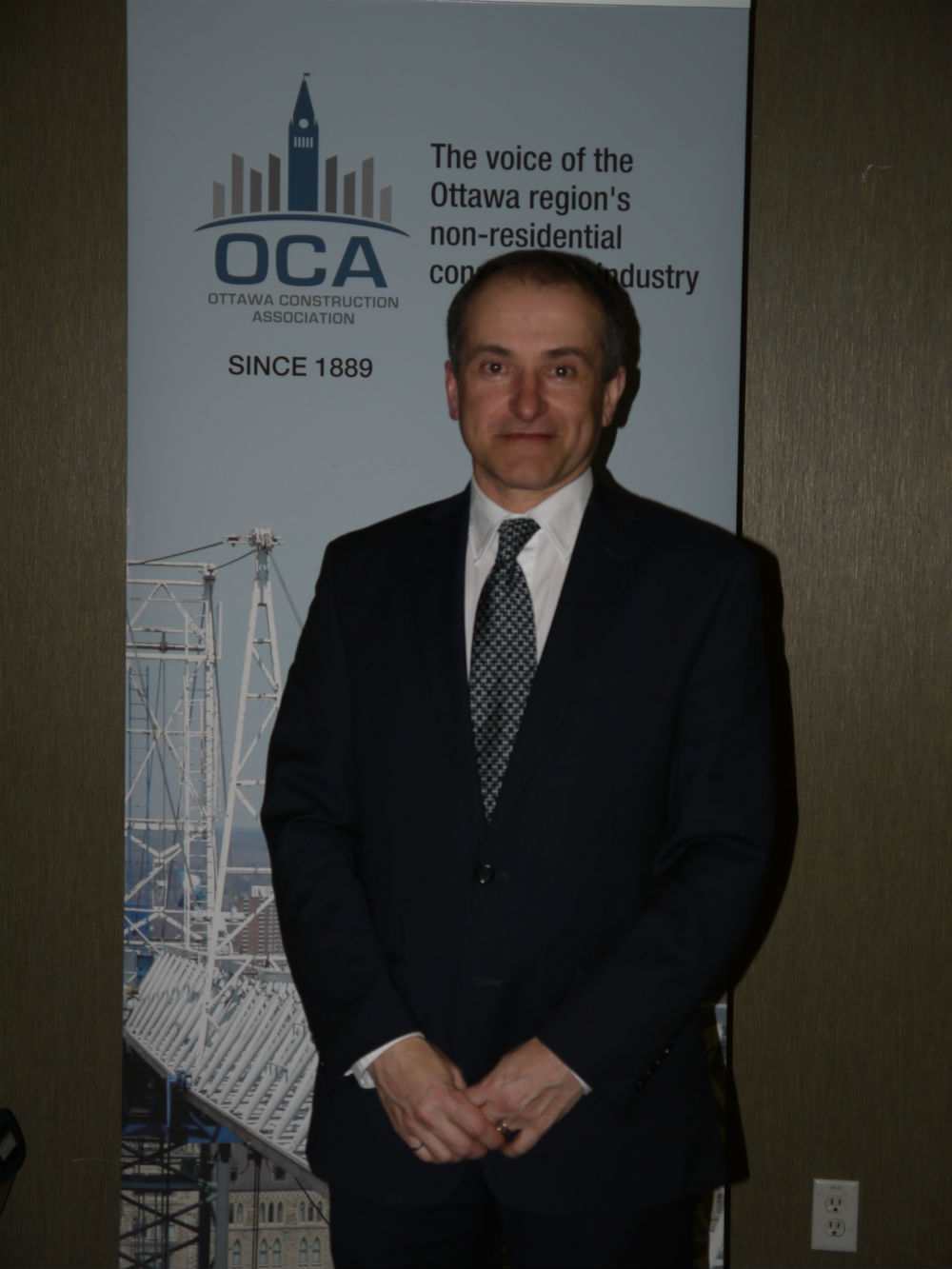 Tony Sottile, the Ottawa Construction Association’s (OCA) 2015 chairperson, has taken the leadership helm at a healthy time. There’s a wad of money in the accounts – if the OCA disbanded today and distributed its worth to members, each would receive a cheque for about $5,380 – membership is increasing, and the number of projects available for bidding through the plans room has reached record levels.

His business, Modern Niagara Ltd., where he is the chief executive officer, also is thriving, attaining 1,600 to 1,700 employees and the capacity to bid and work on the largest capital projects, including The CSEC headquarters and other major infrastructure initiatives.

This success, however, comes as smaller and medium-sized contractors struggle to find work in an increasingly competitive environment, in part because they cannot qualify for the mega-projects that have created the bulk of Ottawa’s record-breaking building permit volume. (The OCA reported that the city issued more than $2.6 billion in building permits in 2014 – “nearly 12 per cent more than it did in 2013 and the third consecutive year in which permit totals have surpassed the $2 billion mark.”)

Of course, the OCA plans to put the millions of dollars in cash and financial resources it has on hand to good use. “The funds will be shortly ALL be put in use for the new facility – something that will last the next 50 years,” says John DeVries, the association’s president and general manager. (See separate story about new headquarters location plans.)

Meanwhile, Sottile suggests the opportunities created by success and the answers to the challenges of the smaller contractors may best be resolved through community-focused and relationship-building strategies.  He wants to extend the OCA’s charitable initiatives to a greater diversity of hands-on projects, reach out to architects and engineers, and spend more time face-to-face with individuals who can improve the community and industry.

“I want to promote things more as a community than an association,” he said.  “We’ve focused a lot on large charities.  I’d like to see it get to the grassroots and get it down to earth.”

He visualizes the OCA could co-ordinate a giving program similar to 100 Men Who Care – where members attend quarterly events, listen to pitches from three charities, and then give  $200 each to the charity of their choice.

“If we could get 200 or 250 members together, we could do it at a function or through functions” and make a meaningful difference to the community, especially for smaller charities who may otherwise have trouble raising the funds they need.  “We can also utilize technology to access our 1100 members, $200 multiplied by 1,100 members creates a $220,000 charity pool instantly!”

Sottile certainly also wants the OCA to continue its initiatives for its major charitable project, such as the Royal Ottawa Hospital’s (ROH) campaign to promote mental health awareness.  The association decided this year to advance its initial $50,000 contribution for the ROH (out of $250,000) ahead of schedule – turning what would have been an approximately $48,500 budget surplus into a tiny $1,500 deficit.

He says his second major goal as chair will be to “increase the profile of the OCA to buyers and suppliers, including architects and engineers.”

“I could lie and say there is a master plan, but I think the best approach is face-to-face, engage our board and membership connections and start the process.”  He says he doesn’t have numbers or specific targets yet.

As well, he says, the OCA’s board will focus on the concerns expressed by its members as the major issues, which are perennial industry challenges: Payment terms and prompt payment, the quality of documents, and the change order process.

He acknowledges these issues are national and provincial in scope and defy easy solutions.  For example, change order conflicts are challenging because “nobody is all right every time – it is a very complex process.”

“In my mind, there’s no sense in publishing another change order document,” he said. “There’s many of those publications there.  This is a by-steps start with discussion.”

Similarly, Sottile says he understands the pain of smaller contractors fighting for space in an environment dominated by bigger projects. He says the problem isn’t that the projects are too big; he says most of the initiatives currently under-way in Ottawa, by their nature, are large.

He says the Modern Niagara experiences the same dynamic within its special projects division – where it needs to compete on a level field smaller contractors, who wouldn’t want to take the risk – “the role of the dice”– in bidding and working on the mega-projects.  “The P3 model works because there is a market for it, for the larger projects,” he said. “I don’t buy the argument that it is sucking work from the other group (of smaller projects); these need to go ahead.”

He thinks the solution for smaller contractors is to focus on building relationships.  “Let’s face it,” he said. “Construction is a relationship-based business.  You’ve got to meet players and find your niche – get face to face and learn about the process and how you can contribute.”

Sottile graduated from Carleton University with a mechanical engineering degree, and has worked in the mechanical contracting industry since 1984. He says when he joined then-Modern Mechanical in 1990, the business had about 50 employees.  As the business grew and added new affiliates, Sottile assumed greater responsibilities, becoming CEO of the Modern Niagara Group in 2004.

“Our members are the heart of this association,” he said in a news release. “Expanding our membership to suppliers, manufacturers and the design community is an important goal of mine.  I also believe that we should leverage technology to provide access and information to our membership. I challenge everyone to get involved.”