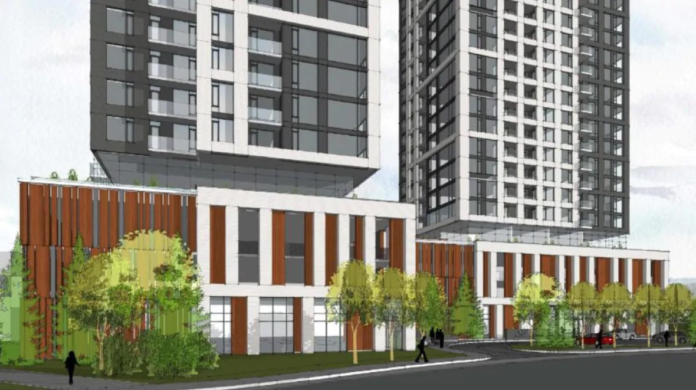 Some neighbours are unhappy with the planned project to build the 27 and 30 storey towers requested by Kingsett Capital and Ivanhoé Cambridge. However, 10 planning committee councilors unanimously approved the rezoning application at a virtual meeting on Nov. 10.

Several nearby residents said they were unhappy that the development would be much higher than the 12 storeys currently allowed in the area, asserting that the new structures will stand out as an “eyesore” in the community, the Canadian Broadcasting Corporation (CBC) reported.

Residents did not like the development’s planned three-story podium because it would not be accessible to the public, and will instead house a parking garage for residents, potentially blocking access to the future Bayshore Light Rail Transit (LRT) station.

“(The design) should enhance the vision intended by LRT, not suffocate it or ignore it,” Mark Hollett, an architect who lives in the neighborhood, told the committee.

The city planner explained that the garage would be designed so that it can be converted to other uses, either residential or commercial, but the owners say the site would not be profitable for commercial uses.

“We cannot see right now, with the current state of retail and where the mall is at, for a commercial use to survive in that podium,” said Graeme Silvera, Ivanhoé Cambridge’s vice-president of retail development. “There just isn’t enough traffic, there isn’t enough visibility for that to work.”

The companies’ consultant said that 45 of the 500 apartments will meet the city’s definition of affordable housing, while most others will adhere to a Canada Mortgage and Housing Corporation definition.

“All the units within the building will be considered affordable in one way or another,” said Christine McCuaig of Q9 Planning and Design.