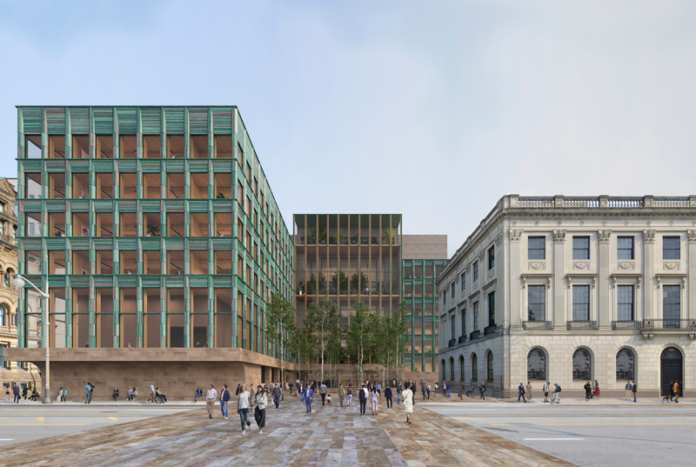 A team including Toronto’s Zeidler Architecture Inc. and David Chipperfield Architects from London, England, won the architectural design competition for the redevelopment of Block 2 – the city block that directly faces Parliament Hill in downtown Ottawa.

The winning design concept, chosen by an independent jury, “best responded to the complex and historical considerations of the area”. The project is expected to bring together the past, present and future, mixing heritage-designated buildings with modern landscaped courtyards and a public square facing the Peace Tower. Also, the design “demonstrates a high level of respect for and understanding of the significance of a future Indigenous Peoples’ space” to be located in the centre of Block 2.

“Congratulations to the Block 2 design competition winner for their creative and innovative design. Thank you to all of the design teams that submitted extraordinary design options. The redevelopment of Block 2 will transform this mix of aging buildings into modern, inclusive, sustainable, secure and accessible accommodations for the Parliament of Canada,” said Filomena Tassi, minister of public services and procurement.

Public Services and Procurement Canada (PSPC) will now enter into negotiations with the Zeidler/Chipperfield team so the design concept can be further refined in anticipation of construction beginning in 18 to 24 months.

The runner up teams were NEUF Architects of Ottawa with Renzo Piano Building Workshop of Paris, France and Watson MacEwen Teramura Architects, Ottawa with Behnisch Architekten of Boston.

All design teams in the competition had at least 1 Canadian component and the Royal Architectural Institute of Canada (RAIC) oversaw the overall competition process, including the selection of the jury. John Ralston Saul served as honorary adviser to the RAIC for the Block 2 design competition.

The redesigned Block 2 will provide office space for the Senate and the House of Commons and will allow for the future consolidation of parliamentary accommodations, including space for the Library of Parliament. It will also include renovated retail space in the Sparks Street Mall.